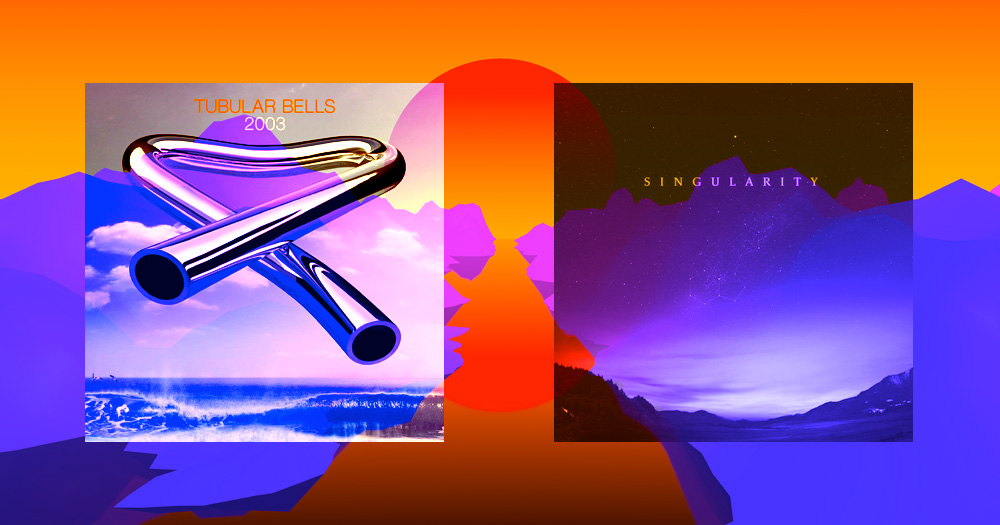 Making a connection between two albums that I find mesmerising as a listener and hugely inspiring as a musician.

As a child growing up in the 1970s, the seminal rock opus Tubular Bells by Mike Oldfield felt futuristic, the kind of music that should have been NASA’s Voyager Golden Record launched into space in 1977. Though much of the sound is produced by traditional acoustic instruments, the contrast between a modernist, orchestral arrangement and electric guitar effects gives the sound an alien vibe. As was the case with Pink Floyd, I recall not having any clues as to who was making the music.

Both Oldfield and Floyd were not visible pop stars in the made-for-children magazines and TV shows I used to watch. This made the music all the more mysterious, I could create my own fantasy worlds based on the cover artwork. I imagined that the bent bell pipe was a wacky new instrument, played on the record, otherwise it was just a mangled exhaust pipe. The section of the album that entertained me most was the voice over announcing all the instruments featured, which closes side one. I had no idea the voice was Viv Stanshall, the same person who appears in The Beatles Magical Mystery Tour film.

I only ever heard Tubular Bells when we visited my grandparents, who had bought it as a gift for my aunt at Christmas. What is now even stranger is that Mike Oldfield once lived in Harold Wood, merely a short bus ride away from Hornchurch, a small village-like town in East London (then part of Essex) where I grew up. The album was released in 1973, a slow-burner in grabbing the public’s attention. Now several remixes and re-recordings later, Tubular Bells is a groundbreaking piece of art in world music. It’s an album that I am more influenced by today than I ever was during the intervening rock ’n’ roll years between childhood and middle-age.

I had more patience as a child, to absorb its dreamy qualities, because at that age we have almost no preconceptions or biases about anything. Ignorance is blissful and very useful for creativity. As adult creators we tap into innocence, in order to captivate the listener, who are looking for escapism themselves. Mike Oldfield was one of the first DIY musicians, recording early demo versions at home, playing all the parts. He may have unknowingly invented recording software, by constructing arrangements on paper that resembles the visual, spreadsheet-like, musical timeline in Pro Tools.

For solo instrumentalists, Tubular Bells still provides limitless inspiration. I don’t sing, but I can multi-track my guitars, just as Oldfield did, to create my own ensemble of dream-like soundscapes. Tubular Bells has, indirectly or subconsciously, influenced many electronic artists too. The 2018 electronic/progressive album Singularity by Jon Hopkins feels to me like a milestone in popular music as much as Oldfield’s 1973 groundbreaker. I enjoy listening to both albums from start to finish, they take you on a sonic journey.

Recording techniques employed are wildly different, though Oldfield has since adopted the modern technology he likely craved for back in the 70s. Musicians from any era want to push the envelope of technology, grab anything that can realise their vision quickly. This explains why Tubular Bells has been re-recorded and remixed so many times (maybe too much, though it’s a money-spinner no doubt). Creative works are never finished in the minds of the creator. But for the casual listener, you hardly notice the defects or whether a particular guitar solo is off-key slightly. Certainly early multi-track recording with tape had it’s problems with wear and tear.

Today’s electronic artists often exploit the grainy, fuzzy overtones of analog tape for creative means by deliberately making samples sound glitchy. Singularity might be rooted in EDM tradition, on the same lineage as 1970s disco, but it’s not really dance music at all. In the same way that Tubular Bells is not progressive rock. The two albums, separated by 45 years, are both popular and outliers to any genre dreamed up by music critics. I’d be equally proud of creating either of these recordings.

Both albums are immensely inspiring for different reasons, though I’d not have a clue where to start with an Albeton workstation, the toolbox of choice for EDM artists. All I can do is attempt to combine the guitar-orientated feel of Oldfield’s more manual construction of music with Hopkin’s skills with sound-painting. Though I am as influenced by dance music as I am rock guitar. What ties everything together for me is pure escapism, feel and rhythm.

While I have yet to release anything approaching the grandeur of either Tubular Bells or Singularity, my latest release Deep Sun is a sketchbook of ideas on the road to something closer to my own creative vision. Visit Bandcamp and check out my latest E.P. Deep Sun, instrumental ambient-orientated rock, music that is inspired by many of the artists I write about.