I dust down and revisit one of my favourite albums, Public Enemy’s Fear Of A Black Planet. Music that bridged rock, soul and civil rights.

Public Enemy’s Hip Hop opus Fear Of A Black Planet has many virtues. It’s one of the most powerful political statements ever committed to vinyl. It’s also a work of art, an abstract expressionist painting in sound waves. It’s a Rock album and a Soul album. It all swings like a gigantic pendulum. FOABP is not a dance record. However, the beats often evoke the cool swagger of Philadelphia soul. Public Enemy expertly channel classic R&B through the lens of civil rights. It’s a kind of audio documentary too.

Released in 1990, it was the first Hip Hop album I had bought. At this point of my life I was consuming more subversive strains of hard rock. Particularly bands like Slayer, Faith No More and Rage Against The Machine. Public Enemy straddled the clear boundaries between R&B and Metal. For me there has never been any boundaries in music. Music fans might appear tribal, in terms of their fashion sense. But our listening is often more diverse. 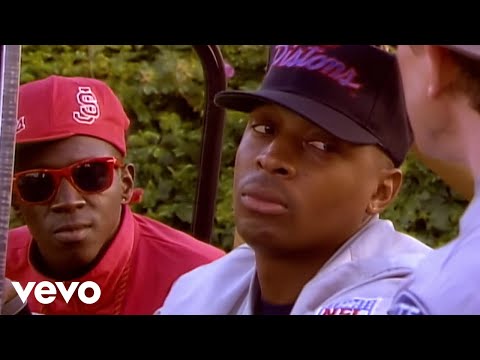 The Sugarhill Gang’s Rappers Delight was for me, aged 10, a kind of cool novelty record, great to get people dancing at our council flat parties. I’ve only really just begun to understand the origins of Hip Hop in the USA, partly thanks to the brilliant and exhaustive Steve Greenberg podcast Speed Of Sound. Back in the late 70s, I listened to a lot of black music, particularly UK mixed ethnicity groups like The Specials, along with other dance-orientated pop music of the era. It all feeds into my own influences today. Considering that sampling in the 90s was still cut with tape, this album was a triumph. Of course audio sampling goes right back to the 1960s. The Ringo Starr drum loop on The Beatles Tomorrow Never Know’s might have invented Trip Hop, a 90s form of psychedelic rap. Public Enemy were also DIY musicians. Production of Fear Of A Black Planet was handled by The Bomb Squad. According to Chuck D, this album was “shooting for Sgt. Pepper”. 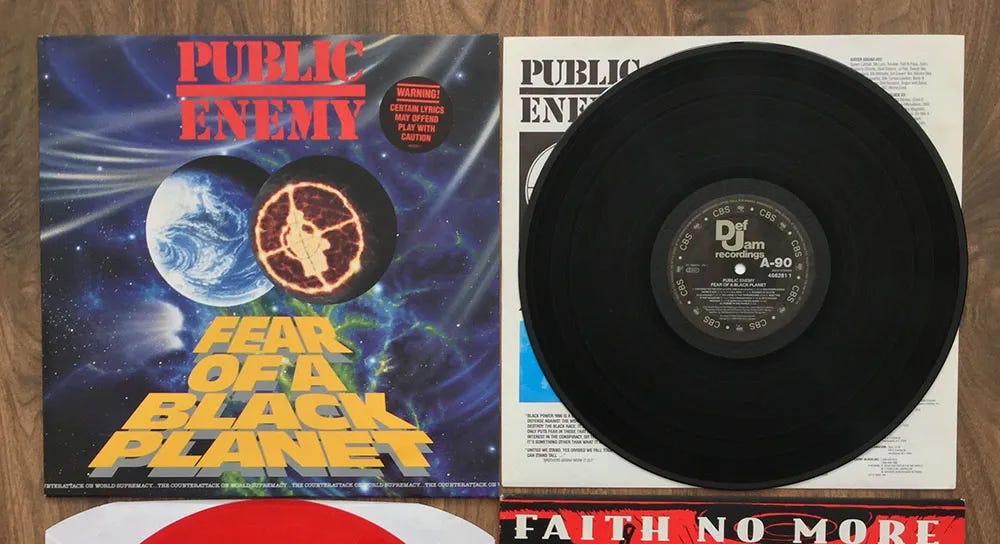 My original vinyl copy of Fear Of A Black Planet, from 1990.

I love how they invented new production roles in audio sampling to create feel and spontaneity. The editing and mixing is jammed and improvisational. Public Enemy were the first to use Hip Hop as a political voice, breaking away from its origins as Disco Rap in the 1970s. MCs in dance clubs rapped over and scratched vinyl records. There are parallels with Reggae Sound Systems that were popular in the UK. In fact, audio speakers were generally considered a declaration of coolness back then. As a teenager I carried a portable cassette player around with me everywhere. Playing loud music in public was a kind of social media for the time, at least if you were under the age of 20. The real centre-piece of FOABP is the vocal and lyrical dexterity of Chuck D contrasting with the surrealism of Flavor Flav. The lyrics are syncopated expertly around the swinging beats. The voice acts as both lead and rhythm instrument. Even when presenting a radio show, Chuck D has a rhythm to his normal speaking voice, as though he lives and breathes his art.

There were controversies that arose over the lyrical content of FOABP, there’s no holding back here. It’s certainly not for me (a white guy) to judge what being the victim of racism feels like. Art needs to take risks in order to tear down the deeper prejudices that still exists today. Subversion and satire are healthy in popular music. Though music is certainly not as powerful as it once was in shining a spotlight on social injustice. Art should be free of constraints and allow imperfection. For me, music artists were always the conversation starter at a gig or bar with your friends. The records and artists provided the talking points. In the late 1980s there was apparent solidarity between Hip Hop and Metal groups such as Anthrax, who recorded a version of Public Enemy’s Bring The Noise. I fully embraced this solidarity, others were less enthusiastic. Perhaps Rock cashed-in on Hip Hop’s success, but Public Enemy were a different proposition and helped shape my own music. 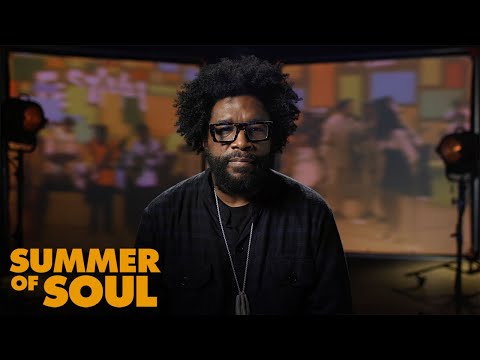 Zooming out from Fear Of A Black Planet, and into the era of 1960s civil rights is the 2021 documentary film by Ahmir “Questlove” Thompson Summer Of Soul. Billed as the Harlem Culture Festival, this concert took place in 1969, my own birth year. It features a glittering array of virtuosic black artists including Stevie Wonder, Sly & The Family Stone and Nina Simone. To name only a few. All heroic figures in music. The better known Woodstock festival from the same year, also starred Sly Stone along with Richie Havens and Jimi Hendrix. Woodstock was more Rock-orientated, though still a significant event. However, watching Summer of Soul (dubbed the Black Woodstock) is a real treat for music fans. 1960s Soul (and later Funk) still inspire generations of Hip Hop artists to this day.

Fear Of A Black Planet by Public Enemy (1990) is available wherever you get your music, including the Deluxe Edition with bonus material.

To hear contemporary Hip Hop, check out “And You Don’t Stop”, a Hip Hop radio show hosted by Chuck D, which you can stream on Mixcloud.

The Summer Of Soul documentary is highly recommended and available to stream on Hulu (USA) or Disney+ (UK), the performances are incredible!